The Monrovia Historical Society (a separate organization from MOHPG) was formed in 1979 to assume the care and maintenance of the George H. Anderson House Museum — a fully-furnished 1886 home depicting family life of the time.  The Anderson House was painstakingly restored by volunteers and passed from the Friends of the Monrovia Public Library to a newly created Historical Society.  But, membership in the Society declined over the years and founding members passed away, and the Society itself became dormant. Sadly, with fewer volunteers it was no longer open to the public.
The creation of the Monrovia Legacy Project, made official by the City Council in September 2015, helped to correct this situation.  One goal of the Project was to revitalize the Monrovia Historical Society so that the Society can enlist new members, raise funds and work towards restoring the Anderson House and once again open it to the public.  The other goal (the primary goal of the Legacy Project itself) was to digitize our City Historians' historic photos and papers, which belonged to the Society, and make them available to the public.  That effort -- a 3-year undertaking — is now complete and you can access the Monrovia Legacy Project's collection of over 6,000 items online via the Library here.  [link   https://cityofmonrovia.pastperfectonline.com/]

If you would like to support the Anderson House and the Historical Society by becoming a member, you can access the Society’s website here.  [link:  https://monroviahistoricalsociety.org/] 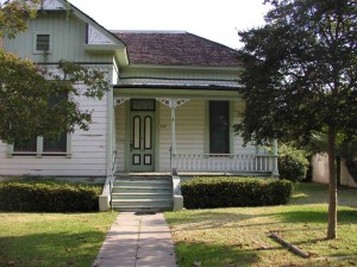 The Anderson House Museum as it appears today.
Anderson House Museum
​
George H. Anderson lived in this house for almost all of his nearly 88 years. The home originally belonged to his parents, John and Lizzie Anderson. John was active in the business life of Monrovia, serving on the City Council in the early days. He died in the home on January 25, 1902.

Lizzie Anderson continued to live there with her son George until her death on April 18, 1912.  George, who never married, lived in the house until his death on July 10, 1974. 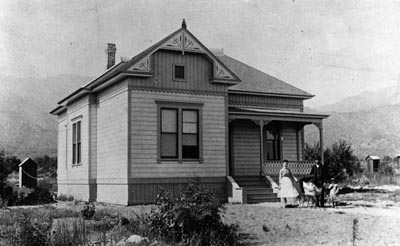 The Anderson House as it looked in 1886.
Since then the Anderson House has served as an example of what a turn of the twentieth century home might have looked like on the inside.  Furniture and other artifacts re-create the living environment from that time period.

At the present time the museum does not have regular visiting hours.  However, if you wish to make arrangements to view the interior, contact us.